A panorama is made by combining a series of overlapping photos to create a single high resolution image, covering a field of view that is greater or at a final resolution that is higher than that possible using a single image. Here are some notes describing how I go about creating panoramas. 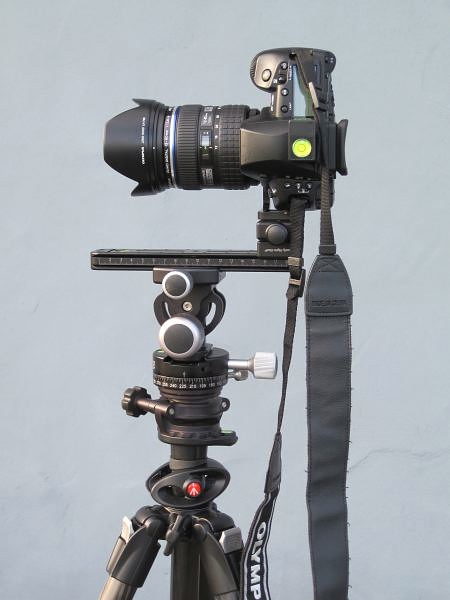 My current set-up is shown here. The main components are (from the bottom up):

I use Arca-Swiss style clamps and plates, which means all of the components are interchangeable.

The important thing for panorama photography is to have a level base upon which you rotate your camera. I open up the tripod legs to a comfortable height, and then use the self-levelling base to very quickly establish a level base.

The nodal slide allows me to rotate the camera / lens combination around the nodal point of the lens, which avoids parallax problems. Parallax is where the relative position of foreground objects change relative to background objects as you pan the camera. This can cause the foreground object(s) to appear as double images or blurred in the merged panorama.

The monopod head makes it easy to tilt the lens up or down without introducing a lateral tilt. This means the same angle is maintained as I pan the camera. This means images will align much easier and reduce the risk of a slanted or wavy horizon.

Depending on the view, I select an appropriate focal length. The longer the focal length, the more detail you can bring into the panorama, but it will obviously take more images to capture the scene, and hence final file size will be larger. I try to avoid too short a focal length, as the angles between the image planes of the adjoining images will be too large, and may make the stitching process difficult to get right. As a rule-of-thumb, I prefer focal lengths greater than or equal to 17.5 mm on my four-thirds system (=35mm on a Full Frame or film camera) which gives a horizontal field of view of about 40.7 degrees. The other consideration here is to ensure there are enough high contrast objects in each image to allow precise image alignment during the stitching process. I usually aim for something like a 35% horizontal and/or vertical overlap between adjoining images.

My next consideration is to select an aperture appropriate for the depth of field that I wish for the overall scene. I meter for the centre or most important part of the image, then switch to manual, and ensure that shutter speed and aperture are fixed at those settings. I always shoot RAW images, so that I can experiment with White Balance once back at the computer.

Convert the RAW images to 16-bit TIFF or finest JPEG, with the same White Balance settings applied to the entire series. The next step is to join the photos into a seamless image. There are a number of software packages that are able to automatically find common points in a series of overlapping images and merge them into a single image. One of my favourite stitching software packages is Autostitch, which is available free (Windows only). It has only occasionally failed to stitch, in which case I have sometimes resorted to manual image registration in an image editing package such as Photoshop. However, a more powerful package is Hugin, which gives you several options in terms of projection mode.

I then bring the stitched image into Photoshop or the Gimp for cropping and final image editing.

Some understanding of the various projections used to join images together and then project them onto a 2D plane in the final image is necessary. Autostitch uses a spherical projection in the free version. If you can imagine, all of the images are "pasted" onto the inside of a massive sphere. This makes aligning them relatively straight forwards, and handles horizontal as well as vertical alignment, up to 360 degrees and 180 degrees respectively. However when the combined panorama is projected onto a 2D plane, you can get some weird effects. For instance, the image below comprises a set of 6 images of a retirement home combined using Autostitch. The road is meant to be straight, yet it curves away from the centre, with the buidings in the centre looking much larger, whilst those towards the lateral edges get progressively smaller. This sort of projection is suitable for landscapes and cityscapes, but not really architecture, where the focus is a single large building dominating the scene.

Hugin supports a range of projections. The rectilinear projection handles the same set of images much better. It uses the field of view of each scene, and overall horizontal field of view to progressively stretch the image vertically as you move from the centre to the outside edges. This corrects for converging parallel lines in the individual images as the camera is rotated left and right from the centre of the scene. This is able to keep buildings and roads straight as you can see from the image below, hence is far more suited for architecture.

Here is the final cropped and edited picture.

Where I have run into problems with rectilinear projection is with expansive vistas with large amounts of clear blue sky. As you will be aware, a blue sky is not the same lightness / saturation throughout. As you go up into the sky from the horizon, the sky gets a deeper blue. The rectilinear projection "compresses" the sky in the centre of the panorama, such that it appears darker, whereas the lateral parts of the image are strectched and so the lightness is extended upwards. When you crop the resultant image to be rectangular, the relative darkness in the centre can become obvious.